First of all, I learned that people don’t settle on ideas very easily or quickly. Heck, my group settled on our idea around 3:30pm officially. I learned it’s good to ask people about their availability as well, because people do leave early on occasion, and learning that late into planning is very hard to adjust to, depending on the project.

The way the Stamford hackathon was set up allowed it to be a community event, so if you felt like taking a break, you’d be able to see a maker fair, pine wood race cars, and even a demo for the yet-to-be-released HTC Vive (pictured below). 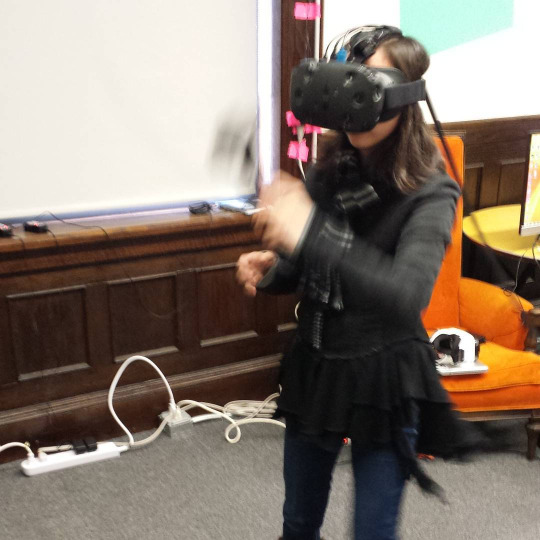 A personal problem was that I didn’t have enough skills to get involved in more involved projects. The main cause of this was because some of the technologies we got special access to required knowledge of Android development or more involved backend code (since the front end was technically the device in some cases). I did eventually find other people that were more front end oriented, and we eventually became a group. I finally used GitHub for non-class related things, and learned that there is much more to learn.

Lessons in the Industry

Since we had special access to specific APIs and people who could help us learn to use it, I was able to take a deeper look into what languages have libraries ready for them and which languages are actually used by the developers. Not only that, but I was able to meet real people trying to go into software development as well as professionals. Anyone I talked to was incredibly kind and I had some really interesting conversations.

Tomorrow is the last day, we’ll be finishing projects and find out who wins awards.